Before I begin I warn this content may offend and or shock you I do not apologize truth is not apologetic.
p.s this will also be a rant

Every election season it seems that more and more people come out claiming s.r.a satanic.ritual abuse or accuse others especially high ranking members of society of satanic ritual abuse.
and while I do not deny that ritualistic abuse happens it I must make it clear that it is not satanic nor does it have any connection to satanism or the rituals that satanists practice.

This election season we have a group called Q WHO make the claim that democrats are satanic baby eaters this has been something people tried with the last election season calling Hillary clinton a baby eater.
lets say for sake of argument that the clintons are apart of a worldwide elite cult that eats kids where is the proof that these are the actions of satanists?

The largest terror organization in history the christian religion invented the devil and the media image of satanism to cover up their own misdeeds and a figure to place blame on so that they do not need to accept responsibility
those who control the media control the narrative.

Donald Trump a man that represents the christian anti christ has embraced christian fascism in order to maintain a solid base of voters.
the average trump voter is a white middle class Christian who wants nothing more than to serve their god and make others do the same in the name of goodness at any cost.
their hatred for homosexuality,transgender,abortion rights and non whites are is excused and justified by their bible their so called god.
Trump plays these people like a fiddle and they are blind to it.
or maybe they just do not care as long as someone is supporting their sadistic agenda.

let me remind you that in the christian religion “god”not their fictional devil killed babies,children,women and brought plague and starvation to innocent people he allows rape,murder,cancer,child abuse ,racism,slavery and other atrocities all while he sits back watches with a smile.
This is not a god of love this is a sadistic abusive being and christians are in an abusive relationship with their so called god.

Christians know the devil very well they call him god and lets not confuse all of this with the actual satanism/satanism
satan is not out doing any of these things in fact satan does the opposite
the solar deity Marduk is who your christian god really is do the research and you shall see for yourself that the solar deity is vile and cruel while nocturnal deities are peaceful and compassionate.

while these far right christian fascist movements preach that satanists are trying to create a new world order they are right in a sense yes we wish to change the world to be. a better place with out the sadistic christian god.
but we are not violent for the sake of being violent we do not ritualistically harm children or any living being and anyone who says so is slandering us and creating fear which leads to harm

We are not dwelling in the basements of pizza restaurants we are not protecting Hillary clinton or Donald Trump who are actual crime partners.
we seek and expose the truth.
those of you promoting far right christian fascism about sra are a problem and are being used as psyop puppets.
every innocent satanist who is harmed and or harassed by your disinformation is blood on your hands and for everyone of us that falls one of you shall suffer a worse fate let it be done hail satan. 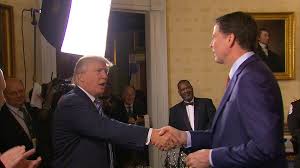 Fired fbi director James Comey has reportedly left memos of his meetings with potus 45. In on such memo Comey stated that he was disgusted when  Trump  pulled him in for a hug and kiss He regarded the episode as a physical attempt to show closeness.
Comey had stated that he felt uneasy around potus and felt that any sort of relationship between the two was disgusting.
You can read the numerous news articles describing comey’s encounters with potus 45.

word is in the white house that Trump may have touched the former FBI director inappropriately while asking for his loyalty allegedly Trump may have asked comey to perform oral sex on him as a sign of ultimate loyalty.
we surly hope that these are baseless rumors but the actions of potus 45 and his own words may be  incriminating enough to hold up in a court of law.